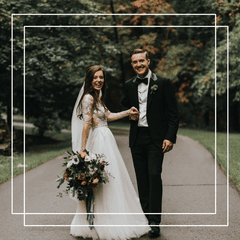 A Beautiful Fall Wedding at Home in Grand Rapids, Michigan

Blair Donovan
Blair Donovan was a digital producer and SEO writer at Brides from 2017 to 2019. She is currently the shopping editor of style at Apartment Therapy Media.
Brides's Editorial Guidelines

Dan and Marisa happened to meet their very first month of college in 2013, but an entire three years went by before they went out on their first date, which couldn’t have been more adorable. Dan picked up his future bride, who had a broken wrist at the time, to take her out for tacos. The real kicker? He even went so far as to help Marisa eat, given her injury. “I remember feeling so connected from the start,” the bride recalls of their early relationship. A healed wrist and college graduation later, Dan popped the question (in a castle on the countryside, no less!) over Thanksgiving 2017 in France, where Marisa had moved after school. “It was magical,” she recalls. “My whole family joined us, and we celebrated with a heartfelt meal and meaningful conversation with my parents on love, marriage, and commitment.”

Marisa’s parents also largely inspired the locale for their October 26, 2018 nuptials in Grand Rapids, Michigan, Marisa and Dan chose to marry in the very first church Marisa's parents had attended at the start of their own marriage, and where the bride herself was baptized. Topping off the sentiment, the mother and father of the bride also hosted the reception in their breathtaking backyard. “I really wanted my wedding to feel homey,” Marisa explains of the venue choice. “My parents' meadow was always my place to go to think when I was small, and it held such a special place in my heart. I loved the huge trees and rolling hills. It felt so romantic and dreamy, yet intimate.”

And, speaking of romantic, the couple relied on plenty of candlelight and dramatic flowers to bring that vibe to life, albeit with a modern, fall-infused twist. Personalization also lay at the forefront of the big day, with no shortage of intimate traditions and anecdotes. Keep reading to see this sentimental fall ceremony in action, captured by Jonnie and Garrett and planned by Modern Day Events & Floral.

To tastefully allude to the season, the wedding took on a dusty blue color palette with contrasting red, gold, and purple accents.

In honor of her father, a Dutch immigrant, Marisa kicked off the big day with a tribute to his heritage: a signing ceremony. “In Holland, the signing of the wedding certificate is a ceremony,” she explains of the custom. “In order to incorporate this here, we had our close family and friends over to my parents’ house before the wedding for hors d’oeuvres and champagne and a signing ceremony. It was a great way to get to spend time with our core people before the busyness of the day got started.”

With the help of her mother (who actually pulled her dress off the rack!), the bride stepped into her stunning Liz Martinez long-sleeve ensemble with silver rose appliqués. Marisa’s family accompanied her dress shopping in Paris—just a day after she got engaged! Her dress designer happened to be having a trunk show in an apartment overlooking the Eiffel Tower, where the bride’s gown of choice made all four of her sisters cry.

The groom, on the other hand, sported a tuxedo with a leather lapel, which he also bought in Paris with Marisa’s father while she gown-hunted. Dan and his groomsmen donned matching bow ties and boutonnieres.

Marisa (and occasionally Dan!) carried a stunning blend of lush fall florals, also by Modern Day Events & Floral. The couple opted to do a first look, then exchanged notes with each other.

The bride wanted the wedding party to look completely natural and effortless, so her girls wore an assortment of gauzy Jenny Yoo gowns and loose hairstyles. Even the flower girls looked the part in ivory frocks with baby’s breath flower crowns.

During the ceremony, Marisa’s mentor and former piano teacher played "Clair de Lune," a piece both newlyweds hold dear, as she walked down the aisle. The bride and groom also read aloud notes they’d written to one another before taking their vows.

Afterward, friends and family showered the lovebirds with flower petals as they made their grand getaway in a customized convertible.

Dan and Marisa also reveled in some alone time before the reception in the bride’s childhood home. “We grabbed an espresso from inside my parents’ house and relaxed for a second in my bedroom while I touched up my makeup,” Marisa recalls. “We couldn’t stop laughing about how crazy it was that we were married.”

A large curtain sectioned off the tented reception for cocktail hour, where guests enjoyed a charcuterie board and signature beverages inspired by the bride’s time in France and the pair’s former vacation in Italy.

When it came time for the newlyweds to make their exciting entrance (fittingly to Beyonce’s “Party”), the curtain partition fell away to reveal the dreamy dinner setup, complete with overhead greenery, elegantly draped florals, and an abundance of candles. “It really felt like such an intimate and magical setting, especially with the background of the fall-toned meadow and forest all around us,” says Marisa.

Adding to the personalized nature of the festivities, dinner featured an assortment of foods from Dan and Marisa's former dates, and they even wrote fun anecdotes on the menu cards themselves.

It gets even better—one of the songs that Dan played for Marisa on their third date, “Take Care” by Beach House, doubled as their first dance tune. "I danced my heart out for hours in 4-inch heels," Marisa adds with a laugh.

Finally, capping off the sweet day on an even sweeter note, the duo cut into a vanilla cake with strawberries and whipped cream—the same flavoring that Marisa’s family always enjoys for every birthday and special occasion.

As for other couples planning their own big days, Marisa advises focusing on what matters most. “Make the day all about the love in your relationship and between your friends and family, because if you’re successful in achieving that, the day will be perfect no matter the weather or mishaps or details,” she explains.