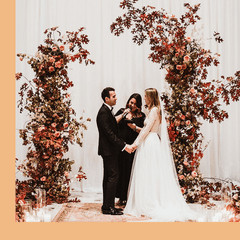 Planned by Heartthrob Weddings and Events.

On the morning of their wedding, Anastasia McMurry, an attorney, and Rahman Popal, also an attorney, met on the terrace of their hotel to read one another their vows. “We exchanged our stories of how we fell in love, the little things that we found special about each other, and committed ourselves to stay in love forever,” Anastasia says. “The rest of the day was just a celebration of this very private intimate and beautiful moment with the rest of our loved ones.”

That it was. Anastasia and Rahman threw a party for 150 guests at the Asian Art Museum in San Francisco, in November 2019. They choose the fall date since they love the colors of autumn, but also happen to have fall birthdays and a fall engagement as part of their love story. It seemed appropriate, explains Anastasia to say “I do” surrounded by autumnal vibes.

The couple hired Emily Gaikowski of Heartthrob Weddings and Events to fill the historic venue with red, deep peach, dark green, and even hints of black décor, from the dramatic floral arch for the ceremony to the greenery wrapped on the three-tier wedding cake. They added in nods to Rahman’s Afghan heritage, including serving Afghan beef kofta and inviting guests to dance the traditional attan. Anastasia worked closely with her florist, Amanda Vidmar, to pick flowers with specific meanings, like dried lunaria to honor her late father.

They also found a few moments to hide away as a couple and take it all in. “After the ceremony, we opened a bottle of Champagne and reflected on our marriage and our friends and family,” Anastasia says. “It was an amazing feeling.”

Read on for all the details of Anastasia and Rahman’s fall-inspired wedding, planned by Heartthrob Weddings and Events and photographed by Hannah Costello.

When Anastasia was trying on dresses as Sarah Seven in San Francisco, she realized that the person helping was, in fact, the designer herself! After hitting it off, Anastasia did one thing she never thought she would: she collaborated with the designer on a custom gown. The result was a form-fitting, long sleeve lace dress with a sheer organza skirt. She paired it with a cathedral-length Sarah Seven veil, Stuart Weitzman shoes, and jewelry from Catbird.

With the dried lunaria of her bouquet, Amanda Vidmar added garden roses, chocolate cosmos, and other dried flowers to the arrangement.

We exchanged our stories of how we fell in love, the little things that we found special about each other, and committed ourselves to stay in love forever.

Anastasia and Rahman met on the terrace of the Fairmont San Francisco to privately share their vows during their first look. “It was beautiful,” the bride says.The couple would later steal away for other private moments following the ceremony to toast to newlywed life together.

A massive floral arch and Persian rug anchored the ceremony space, which is currently the Asian Art Museum. It was once the San Francisco Public Library, which adds to the story of the space. “The building itself is beautiful and has its own unique history—somewhat of a metaphor for marriage itself,” Anastasia says.

During the ceremony, Anastasia and Rahman recited simple vows, different from those they exchanged earlier in the day. They wanted to keep their private vows to themselves.

The newlyweds exited to a pianist’s cover of Aretha Franklin’s “I Say A Little Prayer."

Before joining their guests, the couple descended the venue’s grand staircase to sneak into the bridal lounge for a moment alone. They opened Champagne and reminisced on the momentous occasion—they were married!

More autumn-inspired arrangements filled the reception space, which included a bar and cocktails accented with blooms.

The couple served two signature cocktails and one signature mocktail, all named after their dogs, while the groom’s brother, Mustafa Popal, played live jazz music.

The “Theodore” featured pineapple and pepper-infused vodka, lemongrass simple syrup, fresh lime juice, and orange bitters, all served in a coupe glass and garnished with an edible flower.

The events team flipped the ceremony space for the reception, using large arrangements on the tables to fill the grand space. White pillar candles lit the tables and the walkways, while the place settings featured gold-rimmed glassware and gold flatware.

Anastasia and Rahman’s sweetheart table was framed by the ceremony arch, then covered in more roses and dried lunaria.

I wanted to bring the outdoors in and make it feel like an overgrown autumn garden wonderland juxtaposed with the intricate architecture of the space.

“I wanted to bring the outdoors in and make it feel like an overgrown autumn garden wonderland juxtaposed with the intricate architecture of the space,” Anastasia says. “Amanda Vidmar did an incredible job creating the secret garden vibes we wanted.”

Rahman also went the custom route for his wedding day attire. He wore a bespoke black tuxedo jacket with pleat-less tuxedo pants and a black bow tie, all designed by Hall Madden.

The newlyweds took their first spin on the dance floor as their friend and DJ, DJ Kingmost, played “Simply Beautiful” by Al Green. The song had been performed by Jose James at the first concert the couple attended together.

Not every wedding cake comes with candles! Anastasia had one more private moment with Rahman when she surprised her husband with their chocolate and mocha cream cake topped with birthday candles—and singing the groom “Happy Birthday.” He now shared his birthday with his wedding anniversary.

Mother of the Bride Dress Bloomingdale’s