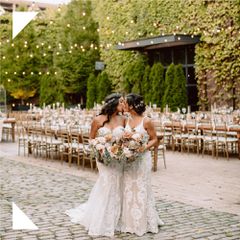 “It was worth the wait.”

Elle Cashin
Elle is a Chicago-based lifestyle writer and editor with a focus on bridal. Her work has appeared in Modern Luxury Weddings magazines nationwide.
Brides's Editorial Guidelines

Juani Feliz and Claribel Jimenez first met casually in May 2007. “We were introduced by Juani’s older sister, who was a friend of Clari’s in college,” the duo shares. “At the time, we were both in serious relationships and never imagined we’d end up dating five years later.” But that’s exactly what happened, when Juani—an actress who stars in the Amazon comedy Harlem and will appear in an upcoming HBO Max miniseries DMZ—and Disney exec Clari reconnected in January 2012. “We crossed paths again, and dove deeper into getting to know each other,” they recall. “One great conversation led to the next, and we found ourselves in a long-distance relationship between Boston and New York that spanned four years.”

They moved in together in 2016 and, two years later, Juani proposed in epic fashion with a flash mob at Brooklyn Bridge Park. They began planning a wedding for almost exactly two years later—and then postponed an additional year due to COVID.

When their 90 guests finally gathered at The Foundry in Long Island City, New York, they were greeted with a welcome sign that read, “It was worth the wait.” It truly was, the brides agree. “If you have always envisioned a wedding of your dreams, it is 1,000-percent worth it,” they say.

Read on to see how their best-day-ever came together, planned by the brides with day-of coordination by Yosi Maldonado at F&M Events and photographed by Natura Collective.

Juani and Clari took planning into their own hands, knowing their visions aligned. “We planned the wedding from start to finish,” the couple shares. “Assembling the right vendors that fit the budget and vision, creating a mood board for the wedding design, and meticulously selecting florals, rentals, music, and details that beautifully came together.”

The vibe was “whimsical and rustic-chic,” with boho elements woven throughout. A muted palette encompassed shades of champagne, dusty green, mauve, nude, and blush. The bouquets echoed this, featuring exotic fresh flowers, pampas grass, dried florals, and protea. “The easiest part of planning was deciding on the décor elements,” they say. “We both had a very clear vision of what we wanted.”

The two brides opted for elegant and romantic beauty looks, brought to life by Amanda Gonzalez on makeup and Reyna at Sheek Studio on hair. “The statement for both of our makeup looks was nude bottom eyeliner, which made our eyes pop so beautifully,” the couple says. “We both chose to wear hair vines.” Juani’s was entangled around a chic updo, while Clari wore hers as a half-halo over loose curls.

Completing the beauty looks were their signature scents—Lolita Lempicka for Clari and Deep Garden for Juani. After getting ready together, the brides split up to get into their gowns. “Juani and I kept our dresses a secret until our first look,” Clari says. “It was the sweetest surprise.”

As soon as I stepped into the dress, I felt a rush of emotions.

Martina Liana Style 1074 was the first dress Clari tried on at Kleinfeld. “As soon as I stepped into the dress, I felt a rush of emotions,” she remembers. “It was so beautiful, I could not stop staring at myself in the mirror.” The experience was extra special as the designer herself was in-store that day for a trunk show. “Juani had already found her Martina Liana dress so we asked [designer] Martine Harris if the dresses would complement each other, and she gave us the thumbs up.”

Juani was more reluctant to look at gowns, but tagged along to a sample sale at RK Bridal with some friends. “It was my first time trying on wedding dresses, and I doubted that I’d be able to find one right away,” she remembers. “I was also thinking of going the jumpsuit route instead of a gown. Four dresses in, I found myself standing in the dress I’d get married in.”

The winner was a vintage lace style with a flared skirt and scoop back, Style 931 by Martina Liana. Juani recalls, "It took my mind some time to catch up with what I was feeling. I snapped out of it when the bridal assistant said, ‘You don’t want to take it off do you?’ and I softly replied ‘No.’ That’s when I knew. I couldn’t unsee myself in that dress, and no other dress I tried on after made me feel the same way.”

“We picked The Foundry because of its unique, industrial, and rustic feel,” the couple says of their venue, which hosted both ceremony and reception. “We fell in love with the architecture, the exposed brick, and the beautiful greenery. We wanted an NYC wedding, but also wanted it to feel like we were elsewhere, and that’s exactly what it felt like—a stunning, rustic, and whimsical secret hideout in the middle of the city.” Beyond a sea of lush ivy, the venue’s courtyard overlooks the Queensboro Bridge.

We were both nervous, excited, and in disbelief that this moment had finally come.

Their unique first look took place before the ceremony in front of a chic boho floral arch by Kraft & Co. “Our photographer positioned us back-to-back on the stage where we would be saying our I do’s,” the couple shares. “We were both nervous, excited, and in disbelief that this moment had finally come. As we waited for the cue from our photographer, the past 10 years of our relationship flashed before our eyes. When we turned around, it was a rush of emotions. We cried and held each other—both thinking, ‘She looks even more beautiful than I imagined.’”

The wedding party donned dresses by Azazie in shades of rose. “They all got to choose the style of their liking; the only ask was for all dresses to have a side slit,” the couple says. Each attendant carried a bouquet that was a miniature version of the brides’.

Juani’s best friend, Maria Centeio, served as officiant. “She was able to give the guests a personal look at our journey as a couple,” the brides share.

In addition to wearing the same bridal designer, Juani and Clari happened to select shoes from the same label, Badgley Mischka. “Both had different styles that nicely complemented each other,” they share.

Juani processed down the aisle first, accompanied by her father; Clari followed alongside her father and stepfather to an instrumental version of ‘Firestone’ by Kygo.

“The entire ceremony from start to end felt like a dream,” the couple remembers. “Our wedding had been postponed a year, and the night before our wedding, New York experienced a severe storm, Storm Ida. For whatever reason, the skies cleared up, the sun came out, and our family and friends showed up from near and far. Glancing at them from the stage made our hearts fill up with so much joy. We felt the love from every single person, all of whom have been by our side through this 10-year journey. As we stood across from each other, we took it all in—that this day and this moment had finally arrived. It was truly the most magical day of our lives!”

The brides exchanged personal vows and the officiant, Maria, wrote a poem about their love that she read aloud. Among the verses were the lines: “If you lead I will follow / But don’t get ahead of yourself / You are not what I imagined / But exactly what I had wished for / With you, I fear nothing / And fear everything at the same time.”

“Easy to Adore You” by Mauve played as the newlyweds recessed down the aisle hand in hand.

Almost every detail was intentionally designed or chosen to represent us as a couple and our shared style.

The brides took on countless DIY projects to make the reception truly unique, from bridesmaids’ hangers to table numbers to graphic design of the welcome sign and seating chart. “We curated the music list from start to end, designed the wedding cake, dinner menus, and signature drinks sign,” they add. “Almost every detail was intentionally designed or chosen to represent us as a couple and our shared style.”

Bistro lights hung above the courtyard and lit the dinner reception. Six extra-long farm tables were dressed with dusty rose cheesecloth runners, assorted brass and gold candles, and floral arrangements with a combination of fresh and dried flowers. Gold chairs provided seating and played into the rustic-chic vibe.

“The sweetheart table was built from scratch by our day-of coordinator’s husband,” the brides say. The arch from their ceremony was repurposed as a backdrop.

Dancing took place indoors, in The Foundry’s Main Space. “Florals and greenery outlined the overhead balcony, along with four circular chandeliers with votive candles,” the brides describe. “The Foundry is known for its exposed brick and alcoves that line the main space. Some of the alcoves were used as seating areas for the guests—benches and chairs with pillows, and tables with small floral arrangements.” The brides created a custom mashup for their first dance, blending Maluma’s “ADMV” with “Flor Pálida” by Marc Anthony.

For the father-daughter dances, they selected “Hija Mia” by Abraham Velazquez and “A Pedir Su Mano” by Juan Luis Guerra.

Being introduced at dinner—for the first time as a married couple—was one of their favorite moments of the day. “We walked out to the courtyard dancing to one of our favorite songs, ‘Mad Over You’ by Runtown. The excitement and energy from everyone took our breath away. That moment set the tone for the rest of the night, which was absolutely epic!”

Additional alcoves around the dance floor housed the DJ, photo booth, and card box—but the main focal point was a floating three-tier cake by Perfectly Styled & Sweet on a rustic wooden stand surrounded by floating candles. Inside? Coconut vanilla and guava Dominican cake.

“Close to the last hour of the night, we had a hora loca, which is a Latin tradition—it translates to ‘crazy hour,’” the couple shares. Fun party props are handed out to guests—glasses, glow sticks, noisemakers—and the DJ plays the most upbeat party songs to get everyone on the dance floor.” It worked, and the night was capped with an epic dance party.

Afterward, the newlyweds continued the party on a long-awaited honeymoon in Cabo San Lucas, Mexico. Now that festivities are over, the brides share it was all worth it. “Every cliché thing anyone has ever said about their wedding day and how you will feel is true," they reflect. "The day goes by so fast, but it will be the best day of your life!”