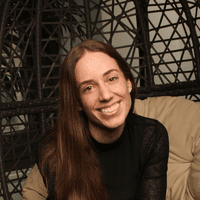 Kaila and Erica’s love story started with a date that almost didn’t happen. After meeting in 2016, the two had planned to get together for dinner when Erica nearly canceled due to a family emergency. Luckily, she decided to stick with their original plan, and they have been pretty much inseparable ever since. “We honestly never really left each other’s side after that,” says Kaila, explaining that their first few dates organically rolled into one another until they were a couple.


Over the next three years, Erica, a nurse, and Kaila, a private therapist and licensed clinical social worker, discovered that they had many things in common including a love of travel. After getting engaged during a trip last year, they originally planned to get married in White Plains, New York, this past August.

Due to safety concerns surrounding COVID-19, they opted instead to have a much smaller backyard wedding in New Jersey. The event capped off a difficult period for the couple who are both essential workers dealing with the challenges of the pandemic. It was also a wonderful way to bring their friends and family together to help them celebrate their special day.

Few couples are lucky enough to have a double engagement, but that’s exactly what Kaila and Erica did—and they have the rings to match. Kaila proposed to Erica in Cinque Terre, Italy last year, followed by a proposal from Erica to Kaila over dinner at home a month later. They ended up selecting matching ring styles, another sign of how in sync they are.

For Erica, the proposal in Italy came as a complete surprise. Although the two had discussed getting engaged, the timing was still up in the air so when Kaila handed Erica a stack of photos spelling out the proposal, Erica was not expecting it. “I had just gone that week to look for her ring and thought I had plenty of time,” she says laughing. She was able to return the favor with an equally romantic proposal and the couple celebrated both engagements with their friends and family.

A Different Wedding, But the Same Great Theme

While the couple was forced to scale down their wedding as a result of COVID-19, they were able to have an intimate backyard reception with just their close friends and family. Initially worried that social distancing would make things difficult, they were pleasantly surprised to discover that the wedding was just as special as they hoped, and even included some extra fun moments like singing karaoke to one of their favorite songs and jumping in the pool in their wedding dresses.

More than anything, Kaila and Erica are surprised by the outpouring of support they received from friends, family, and even their vendors. “There’s been a lot of emotional and physical support throughout the whole process,” says Kaila, emphasizing that this has had a positive impact on the couple as they’ve navigated this challenging time.

With their wedding behind them, the couple thought the festivities were over but they recently had another chance to celebrate their love. As part of the “Honeymoon for Heroes” program launched by the Southwest® Rapid Rewards® Credit Card, Kaila and Erica were surprised with a pop-up backyard honeymoon, inspired by the islands of Belize and Turks and Caicos.

To help them plan their dream honeymoon in the future, the couple also received 200,000 Southwest Rapid Rewards points that don’t expire and they qualified for Southwest Companion Pass®. Companion Pass is one of the most coveted benefits in travel as it allows one person to fly with you for free (not including taxes & fees from $5.60) every time you purchase or redeem for a flight on Southwest Airlines. Companion Pass is good for travel for the remainder of the year that it’s earned, plus the entire next calendar year. That can be a big cost savings when you take multiple trips. So, how do they plan to use those points? The newlyweds say they’re hoping to head to Hawaii for a dreamy beach getaway once it’s safe to do so.