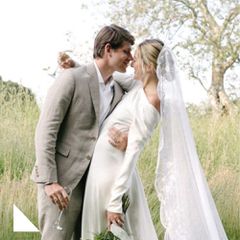 A Music-Filled, Mediterranean Wedding at a Family Farm in Rhode Island

Kelsey Mulvey is a freelance journalist based in San Francisco, and has a decade of experience in print and digital media.

Tribbie de Forest Nassikas and Wade Emerson Madden are proof that some of the greatest love stories are years in the making. In 2008, Tribbie traveled to Rhode Island to accompany her best friend, Ava, on a summer road trip. Little did she know, she would be introduced to Ava’s cousin, Wade. Though they went their separate ways and back to their respective alma maters at the end of the summer, sparks flew when Tribbie visited Ava in Los Angeles eight years later in 2016.

“We went out to see Ava’s brother’s concert, and Wade came as a surprise,” Tribbie explains. “From that day, we never let a weekend pass without seeing each other, [doing] long distance from Los Angeles to New York City. Yes, lots of red-eyes.”

Two years later, Wade made things official during a road trip along the Pacific Coast. He got down on one knee during a stop in Big Sur — and the couple spent the next 10 days in isolated, engagement bliss.

When it came to their 2019 nuptials, the couple got married exactly where their years-long connection started: in Rhode Island. And, the family decided to plan the 125-person event themselves. "My parents and I did it together! Being a designer and with my mom being an artist, this was the best creative project to work on together," shares Tribbie. "We planned the wedding a year out, so it wasn’t rushed at all and went very smoothly."

Keep reading to get all the details of their rustic Mediterranean ceremony and reception, as planned by the couple and photographed by Karen Hill Photography.

The couple envisioned a rustic Meditteranean wedding with an elevated edge. “We loved the rustic backdrop – the farm, the wildflower field, [and] the olive trees—but then had people dress in formal attire,” Tribbie explains. The look was carried out from start to finish, from the Hope Johnson stationery and relaxed table settings.

The bride didn’t have to look too far to find her outfit. “I designed my wedding dress,” she explains. “I worked for Derek Lam as a designer, so Derek and I worked together to create my dream dress!” The result: a stunning ivory silk number with charmeuse lining. Tribbie drew inspiration from Carolyn Bassette-Kennedy and sprung for sleek details like long sleeves, a columnar silhouette, and a high crew neckline, which swept low in the back. She completed her wedding look with pearl-drop earrings from Sophie Buhai and Jacquemus shoes.

It is my maternal great-grandmother’s handmade lace veil.

While her dress was brand new, Tribbie made sure to incorporate something old as well. “[The veil was] ​​the same one my mother wore for her wedding,” she adds. “It is my maternal great-grandmother’s handmade lace veil.”

As a designer, Tribbie wanted her bridal party to look like a mini fashion show as they walked down the aisle. The bridesmaids and man chose their own outfits, keeping within a neutral color palette of black, nude, and blush pink. “Each was bedecked in a different design of baby’s breath flowers,” Tribbie adds. These accessories included a crown, boutonniere, bracelet, boa, and bouquet.

The groom looked dapper in a made-to-measure linen suit from Bhambi’s Custom Tailor, complete with a crisp white shirt and cognac-hued loafers. He ditched the tie in favor of a boutonniere with wildflowers from the venue, as well as a gold ring adorned with his family’s crest. “Since my husband was wearing a beige linen suit, we wanted him to stand out among his groomsmen. So, we had the groomsmen wear dark suits,” Tribbie says. “They were able to pick their own.”

When choosing the backdrop for their summer wedding, Tribbie and Wade kept the venue in the family. “We always wanted an outdoor wedding, and my grandmother’s farm [in East Greenwich, Rhode Island] is where my parents got married,” Tribbie explains. “Rolling fields of wildflowers and a rustic, Italian-inspired farmhouse with a terrace—it was a no brainer.”

On the big day, 145 guests flocked to Greene River Farm, the private residence owned by Tribbie’s grandmother, to celebrate the couple. Guests were greeted by a live string trio, which performed during the processional and recessional.

One unexpected surprise before the ceremony? "Our wedding day began as a beautiful sunny morning, so we thought all would be fine weather-wise for our outdoor wedding," shares Tribbie. "Except right before the ceremony was going to begin, the sky completely clouded over with these huge, dark thunderheads, a sprinkle of rain, then a rush of hail! Then all of a sudden, it cleared and became beautiful again, with the warm afternoon sun making the field just glow. It was beautiful. Dramatic, but beautiful!

The bride carried a bouquet of freesia, sweet peas, peonies, Veronica, and scabious, as well as wildflowers and grasses from the surrounding fields of Greene River Farm.

Tribbie was escorted down the aisle by her father to the tune of “Canon in D” by Pachelbel. “My parents would play this every night when I was little to help me go to sleep,” she explains. “It’s always been my favorite.”

My grandmother’s farm is already so beautiful. There was nothing we needed to do in terms of backdrop or ambiance. The romance was already there!

The couple kept their ceremony décor simple by peppering a field of wildflowers with rustic wooden benches. “My grandmother’s farm is already so beautiful," she explains. "There was nothing we needed to do in terms of backdrop or ambiance. The romance was already there!”

In the ceremony was officiated by Reverend Edward O. Miller, the couple kept their nuptials simple by forgoing personalized vows.

Tribbie and Wade slipped on each other’s wedding rings, made by friend and jewelry designer Monique Péan. “We chose her recycled gold wedding bands to go with the sustainable choice as much as possible,” Tribbie shares.

Guests were given handmade paper cones filled with white petals, which they were instructed to toss across the aisle during the recessional.

The happy couple recessed down the aisle to “Hornpipe” by Handel.

“My mom’s side of the family is from Scottish descent, so we had a highland bagpiper playing in the distant field as guests arrived to beckon them out to the field to the ceremony site,” Tribbie says.

Just be present, be in the moment, and soak it all in!

The couple’s advice for newlyweds? Make the most of each moment. “There is so much build-up to the wedding day, so much anticipation and excitement,” Tribbie says. “And then, the wedding weekend finally arrives and it flies! So just be present, be in the moment, and soak it all in!”

At cocktail hour, guests enjoyed a mélange of hors d'oeuvres such as cucumber gazpacho, shucked local oysters, Tribbie’s aunt’s homemade tiropitas, plus a mezze bar of figs, Greek and Italian cheeses, and spanakopita. The menu throughout the day celebrated the couple's ancestors’ rich, cultural backgrounds. “I’m Greek and my husband is of Italian background,” Tribbie adds.

One of Tribbie’s favorite moments was watching her 93-year-old grandmother enter the reception with open arms. “She was the only grandparent there and died shortly after,” she shares. “It was really special to have her at my wedding at her house, where she saw her own daughter (my mother) get married as well!”

During cocktail hour, guests sipped on beer from Whalers, a Rhode Island-based brewery, and a signature cocktail. The Cali, a paloma adorned with a wildflower sprig, was a nod to their upcoming move to California.

During cocktail hour, Tribbie and Wade made sure to grab photos with their families and the wedding party.

After cocktail hour, guests moved into a tent for dinner, drinks, and dancing. The couple kept the reception’s decor “rustic Mediterranean, yet elegant and whimsical” with a neutral color palette as well as an assortment of olive trees, herbs, and candles.

With a shared passion for the ocean, the couple sprinkled the venue in beachy elements such as shells and stones. Wade’s surfboard served as the guest book, which is proudly displayed in their baby’s room today.

For the couple, it was important to have a sustainably minded menu that also paid tribute to their family’s history. Dinner kicked off with an arugula salad, complete with microgreens, edible flowers, shaved parmigiano reggiano, lemon, and olive oil. Subsequent courses were inspired by Greek cuisine, as evidenced by the skewers of grilled vegetables and halloumi cheese, plus a helping of lamb with mint.

Table settings included burlap and linen runners, olive branches, and scallop shells filled with black salt. “We wanted the table to be warm and welcoming, not rigid and formal,” the bride adds. “We had loaves of sourdough bread on wooden planks for people to cut, and small pitchers of olive oil for them to dip the bread.”

For dessert, guests sampled clementines, bricks of dark chocolate, and a wedding cake from A Thyme to Cook. The cake’s olive oil and almond flavor profile paid homage to a classic recipe from Tribbie’s “Greek grandmother” on her dad’s side of the family.

Tribbie and Wade share a passion for the great outdoors—and planned their special day with Mother Nature in mind. “We wanted our wedding to reflect that by making the sustainable choice where possible,” she explains, noting the biodegradable utensils during cocktail hour and heavily vegetarian menu. “The outdoors is where we are happiest, and both of us were raised and continue to be conscious of our impact on the planet."

The couple performed their first dance to Van Morrison’s “Into the Mystic.” Wade and his mother danced to “Some Kind of Wonderful” by Carole King, while Tribbie and her dad enjoyed a song written and performed by musician and family friend, Garrett Randolph.

We didn’t want the wedding weekend to be cut short in any way.

One of the biggest perks of getting married at a private residence was that there was no curfew. “We didn’t want the wedding weekend to be cut short in any way,” the bride says. “We wanted to have a reception to party ‘till dawn.” Later in the evening, the couple served margherita flatbreads as a midnight snack and gave guests jars of honey harvested from the backyard as favors.

A lively night of non-stop music was a must for the couple. While a live band played after dinner, the night raged on with a set from friend and Parisian DJ Clairema. “Most of my friends are international,” Tribbie explains. “We would party at these cool European clubs, so I wanted to do that for late night after the live band. It was the best dance music ever!”

Catering A Thyme To Cook

Cake A Thyme To Cook