A Playful Garden-Inspired Wedding in Brooklyn 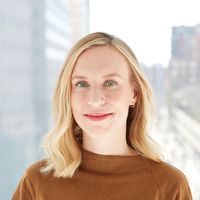 Elyse Moody
Elyse Moody is a writer and editor who has been on staff at Martha Stewart Living and Weddings, O, The Oprah Magazine, and ELLE. She has also written for Allure, Refinery29, The Hairpin, Creative Nonfiction, The Daily Beast, BBC Travel, Publishers Weekly, and more.
Brides's Editorial Guidelines

For Alex Costa and Shannon McManus, the second time was a charm. The two met in 2009 at the University of Delaware, where they were in the same freshman dorm. They dated on and off and stayed friendly. Ten years later, when they reconnected in New York, they “realized very quickly that it was meant to be,” says Alex.

The couple had been sharing a 400-square-foot studio apartment in Williamsburg, Brooklyn for less than a year in August 2020 when Shannon surprised Alex by popping the question one normal, pandemic-style evening at home with a ring that blew her away.

“I think my jaw hit the floor when I saw it,” says Alex. “It was the exact ring I would have picked out for myself.” Shannon had spent months working with her favorite designer, Jemma Wynne, in secret on the emerald-and-diamond toi et moi design, and somehow kept it under wraps in spite of their being quarantined the whole time in their tiny studio. “In typical pandemic style, we celebrated on the couch in sweats with takeout and champagne,” Alex says.

A little over a year later on August 10, 2021, they held a colorful and customized celebration at The William Vale in Williamsburg. The couple invited 60 guests to join them for an evening that incorporated their favorite elements of their life together in Brooklyn, from strolling the industrial waterfront to getting ice cream at Mister Dips food truck. Bright, happy colors and frothy, floaty textures ruled the day, from Alex’s bouquet and romantic, billowy gown to the couple’s rescue pup, Luna, who stayed by their side the whole day and, in a fluffy outfit of her own, doubled as Alex’s something blue.

Read on for details about their mini but magical wedding and reception in Williamsburg, Brooklyn, planned by Marian Frances Wedding & Events with photos by Deborah Ann Photography.

Alex prepped for the day at The William Vale in Sleeper pajamas, a Lele Sadoughi headband, and Cult Gaia clear rhinestone kitten heels.

The couple opted not to have a wedding party, but the couple’s rescue dog Luna served as Alex’s something blue. She was by her side the whole day, from getting ready to reception.

12 Ways to Dress Up Your Dog for Your Wedding

Alex’s bouquet, designed by Flowerwitch, incorporated a mix of fresh and dried flowers in the day’s pastel and brights palette: pinks, purples, blues, greens, and oranges grounded with neutrals.

Alex, a “self-proclaimed beauty junkie,” did her own hair and makeup, including applying individual eyelashes, with a few assists here and there. She focused on skin care to ensure she felt super glowy, applying Biologique Recherche sheet masks leading up to the big day and getting a gua sha facial the morning of at Bathhouse.

For her hair, she prepped by getting subtle balayage highlights at IGK Salon in Soho (she recommends her stylist, Stephanie). “I knew I wanted to feel and look like myself on the day of my wedding and I always wear my hair down, so the style was a no brainer,” she says. She gave her hair a polished wave with her T3 wand and finished it with her favorite Amika hairspray, which left it soft and touchable but held it in place the whole night.

30 Ways to Wear Your Hair Down for Your Wedding

The bride chose her champagne-hued Daalarna Couture gown at Spina Bride with the help of her mom, grandmother, and best friend (who flew in from L.A.). It was a huge surprise, since Alex thought only her mom would be able to attend the fitting at Spina Bride because of Covid restrictions. “It was so special having three of the most important people in my life with me when I said yes to the dress,” she says. “It made the decision so much more meaningful.”

Alex’s gown, with its embroidered organza patterns and billowy sleeves, “was so romantic and went perfectly with the setting.” She wasn’t as set on her heels, however. “I’m notoriously indecisive, so I had a full lineup of shoes at the ready,” says Alex. “My favorites were my glass PVC pumps from Anima Muaddi and pink embellished satin pumps from Mach & Mach.”

Since her dress was “a lot of fabric,” says Alex, she chose to wear a pearl and jeweled headband from Lelet NY instead of a traditional veil. Her small pearl earrings and gold link bracelet are by TAI Jewelry.

16 Bridal Headbands That Are Classic and Beautiful

For finishing touches, the bride wore Diptyque’s Eau Rose and had a white swirl manicure done at Paintbucket in Brooklyn.

The 16 Best Wedding Perfumes for Your Bridal Style

I felt like myself in my dress—it was very me.

Alex’s final look fit her vision perfectly. She wanted “something natural that would photograph well and stand the test of time,” she says. “I felt like myself in my dress—it was very me.” She topped off the look with a pink pearl bag by Simone Rocha.

Shannon wanted “a classic look with a modern twist” for his wedding day. He wore a navy Hugo Boss tux with a black lapel and bowtie with an heirloom gold Ebel watch from his father, black velvet Gucci loafers, and white suspenders—plus Chanel Bleu, “the same fragrance he wore on our first date,” adds Alex.

Alex and Shannon shared a first look and took pre-wedding photos at some of their favorite neighborhood spots around Williamsburg and its waterfront.

Instead of a signature cocktail, the couple greeted guests with passed champagne as they arrived for the ceremony.

Shannon was escorted down the aisle at Vale Park by Luna, the couple’s constant companion for the entire day.

50 Too-Cute Ways to Include Your Pet in Your Wedding

Alex’s stepfather, Joe, walked her down the aisle. “My father passed away when I was 13, and I am so lucky to have such a wonderful father figure in my life to walk me down the aisle on such an important day,” she says.

The couple exchanged vows in front of a living garden, inspired by the one they tend to on their apartment’s balcony. “We repurposed it for our lounge during the reception,” says Alex. “That was a great way to save and still have florals that made a big impact.”

The couple did write their own vows, but they exchanged them privately at home a few nights before the wedding instead of on the big day itself. “That made it feel very special and personal,” says Alex.

For the recessional, the couple chose to play “Hands Down” by Dashboard Confessional, who they saw at their first concert together.

A violinist from the New York–based group 7th House Strings played covers of some of Alex and Shannon’s favorite songs on an electric violin during the ceremony and cocktail hour.

Dusty rose table linens tied together the colorful palette for Alex and Shannon’s outdoor celebration. When the weather turned windy, they had to improvise the tabletop decor. Originally, they planned to have ceramic vases and candles in glass hurricanes. But “the wind had other plans,” says Alex. “Hearing the glass shattering in the background while taking our family portraits was definitely one of the more stressful moments of the day.” On the spur of the moment, her florists pulled together gorgeous centerpieces that could lie flat instead.

Alex, who isn’t usually a big crafter, enlisted friends to help her DIY ceramic coaster place cards, which doubled as favors. They applied blue abstract-print wrapping paper to the top of the coasters using decoupage adhesive, then used adhesive labels to personalize them with guests’ names printed in a retro-inspired font.

The 16 Best Wedding Place Cards to Wow Your Guests

The menu was catered by Leuca, the restaurant in The William Vale. “Part of the reason we picked The William Vale was because I’m absolutely obsessed with Leuca’s malfadini with pesto,” says Alex. “It’s to die for. We served it with orchichette, which was more conducive to family-style serving.” The couple and their 60 guests also enjoyed short ribs and kale caesar salad—Shannon’s favorite.

As the reception wound down, Mister Dips, a retro-inspired food truck that’s a neighborhood fave, pulled up to offer guests ice cream and french fries.

15 Sweet Ways to Serve Ice Cream at Your Wedding

The couple didn’t plan on having a wedding cake, but Alex’s two best friends gifted them a couple’s cake from Luckybird Bakery—almond with vanilla buttercream and Belgian chocolate chunks—as a surprise. “That made it all the more special!” says Alex.

These One-Tier Wedding Cakes Are Legit Works of Art

Alex and Shannon skipped the traditional father-daughter and mother-son dances, but partied the night away at Vale Garden to the sounds of DJ Luke Versalko.

At the end of the day, the only thing that really matters is you’re marrying your soulmate.

For the reception, Alex changed into an Erdem gown, accessorized with clear PVC Amina Muaddi pumps and AM alphabet earrings from Retrofete. “It was so fun to sport my new initials!” she says. Her advice to other couples about to tie the knot? “Try not to sweat the small stuff," reflects the bride. "At the end of the day, the only thing that really matters is you’re marrying your soulmate.”