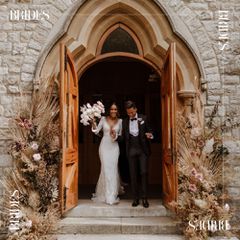 A Classic, Romantic Wedding at Hedsor House in Buckinghamshire, England

Planned by One Stylish Day.

When Charlotte René, a senior technology delivery manager, and Patrick Muyot, a media communications officer, set out to plan a destination wedding in France or Italy, they didn’t expect that the perfect location would be just 45 minutes from their home in London. Hedsor House in Buckinghamshire happened to have everything the couple wanted in a venue—a classic, romantic setting that felt effortlessly chic and stylish. Charlotte and Patrick were sold the moment they pulled up.

“It was everything we wanted from a venue; almost like your own home for the day, where every room would be accessible to all your guests,” Charlotte says of their August 2019 nuptials. “We had always wanted a day that exuded elegance and romance, but with a modern design edge.”

Charlotte drew on her French and Mauritian heritage, as well as Patrick’s Filipino background, to create a day that felt true to their life in England together and honored their families. She worked with wedding planner Louise Hughes of One Stylish Day to pull the wedding all together; highlighting tradition while also adding a modern aesthetic with the flower arrangements, music, and food.

One surprise? Charlotte and Patrick took their first spin on the dance floor to *NSYNC’s “This I Promise You.”

“I’m sure everyone expected we’d choose something a bit more ‘cool,’ but we absolutely love the lyrics to this song and felt it described our journey together perfectly,” Charlotte says. “Plus, who doesn’t love *NSYNC and 2000s classic pop?”

Read on for all the details of the couple’s romantic day in the English countryside, planned by One Stylish Day and photographed by The Curries.

“I love everything about my dress and only wish I could wear it again someday,” Charlotte says of her custom Chantilly lace dress with pearls by Emma Beaumont. Charlotte explains that she found the dress shopping experience stressful, and it wasn’t until she met the designer that she felt excited. “Emma immediately put me at ease and I knew I wanted her to design and make my dress,” the bride adds.

Charlotte wanted one specific flower in her bouquet, anthurium, since it’s the national flower of Mauritius. Her florist, Liberty Lane Flowers, added a variety of roses and orchids to the mix.

Patrick also opted for a bespoke look, working with Zebel Bespoke in London to design his midnight blue, three-piece suit. He added gold cufflinks and a gift from Charlotte: a silver and rose-gold Rotary timepiece.

Patrick’s groomsmen looked dapper in black tuxedos from Next and oxford shoes from ASOS.

The ceremony took place at St. Edward’s Roman Catholic Church in Windsor. Charlotte admits it was a bit far—20 minutes by car from the Hedsor House—but it was important for the couple to say “I do” in a Catholic ceremony.

It was such a wonderful sight to see as I pulled up to the church that day.

Floral arrangements made a statement as they flanked the doors to the church. These creations included dried palm fronds and seed heads, dried bracken, smokebush foliage, and café latte and quicksand roses.

Charlotte made her grand entrance escorted by her father as her cousin sang Eva Cassidy’s “Songbird” alongside a gospel choir. “Although simple, it means so much to us,” Charlotte says of the song’s lyrics.

The couple wed in a traditional Catholic ceremony, though, they included their own prayers and chose a special reading about love from the Bible.

“Patrick would also say that the most memorable moment for him was me walking down the aisle,” Charlotte says of the ceremony.

Both of us recall the amazing feeling once we were married.

The couple met at an office holiday party. While Charlotte says it was a typical meet cute, she adores that Patrick retells the story as if it were a scene in a rom-com film. “Slow motion included!” she adds. He later proposed on a trip to Mauritius with a ring he designed with the couple’s friends at Burt + Gurt Jewellery.

The newlyweds made a dashing getaway from the church in a red Jaguar E-type to head to Hedsor House.

“From the beautiful country lanes leading up to the gated entrance and then a further drive through the breath-taking grounds, we were already filled with excitement,” Charlotte says of first encountering their venue, Hedsor House, in Buckinghamshire. “It was everything we wanted in a venue.”

Though the couple focused on documentary-style photography with The Curries, they did pose for some fun pictures with family and the wedding party outside of the manor house.

Charlotte’s bridesmaids wore satin, champagne-hued gowns that the bride had designed by a friend’s mother, Sylvee Orcran. They each added gold, pearl, and crystal hair accessories to the look and carried bouquets that echoed the bride’s flowers.

Take time to pause and take it all in.

Charlotte and Patrick took a peek at the reception space before the guests arrived from cocktail hour. As their friends and family sipped Aperol Spritzes and munched on lobster mac and cheese, the newlyweds stole a moment to themselves—a must-do for other couples, says Charlotte.

“The absolute winner for us was the dining room: the beautiful floor to ceiling windows, which overlooked the countryside, and the magnificent chandeliers,” Charlotte says. “It was the exact aesthetics I was after.”

The space was filled with long dining tables topped with centerpieces of dried thlaspi, protea, dried palms, quicksand roses, and carnations. Each place setting came with a personalized napkin and note from the couple.

One standout feature of the reception was the massive fireplace in the entrance hall that One Stylish Day adorned with hurricane vases, candles, and an overflowing arrangement which included Charlotte’s beloved anthuriums.

After enjoying European-inspired menu items like slow-cooked Hampshire beef, the newlyweds cut into a three-tier cake with a trio of flavors: white chocolate with raspberry, vanilla with champagne and strawberry, and red velvet. Patrick touts the cake tasting as one of his favorite parts of planning. Charlotte loved that the detailed sugar flowers made the confection look like a work of art.

“One moment during dinner—when the evening sun was casting a beautiful, warm glow upon the room, with the candles flickering and everyone laughing and enjoying themselves—I turned to Patrick and told him to take it in," says Charlotte. "This is exactly what we wanted from our day: all of our family and friends coming together and having an amazing time.”

Patrick’s speech was a highlight of the day. To honor both families, he spoke in Tagalog and French, a sweet touch that was very appreciated by both sides.

A packed dance floor was a must-have for the couple, who hired saxophonist Dan Blaax to perform with their DJ. Charlotte even choreographed a Mauritian Sega routine with her sister and brother to dance alongside her bridesmaids at the reception. The bride notes that no one wanted to leave the dance floor when the clock struck midnight.

The couple kept the party going later in the year. At the end of their six-week honeymoon through Sri Lanka, Bali, and Vietnam, they had a family-moon in The Philippines with Patrick’s extended family and Charlotte’s parents and grandparents. “It really was a trip of a lifetime,” Charlotte says.

Mother of the Bride Dress Altuzarra